It can be a wise move to let your Barber guide you when choosing a new hairstyle, it can also be handy to know the correct barbershop terminology used to describe that certain style you’d like. 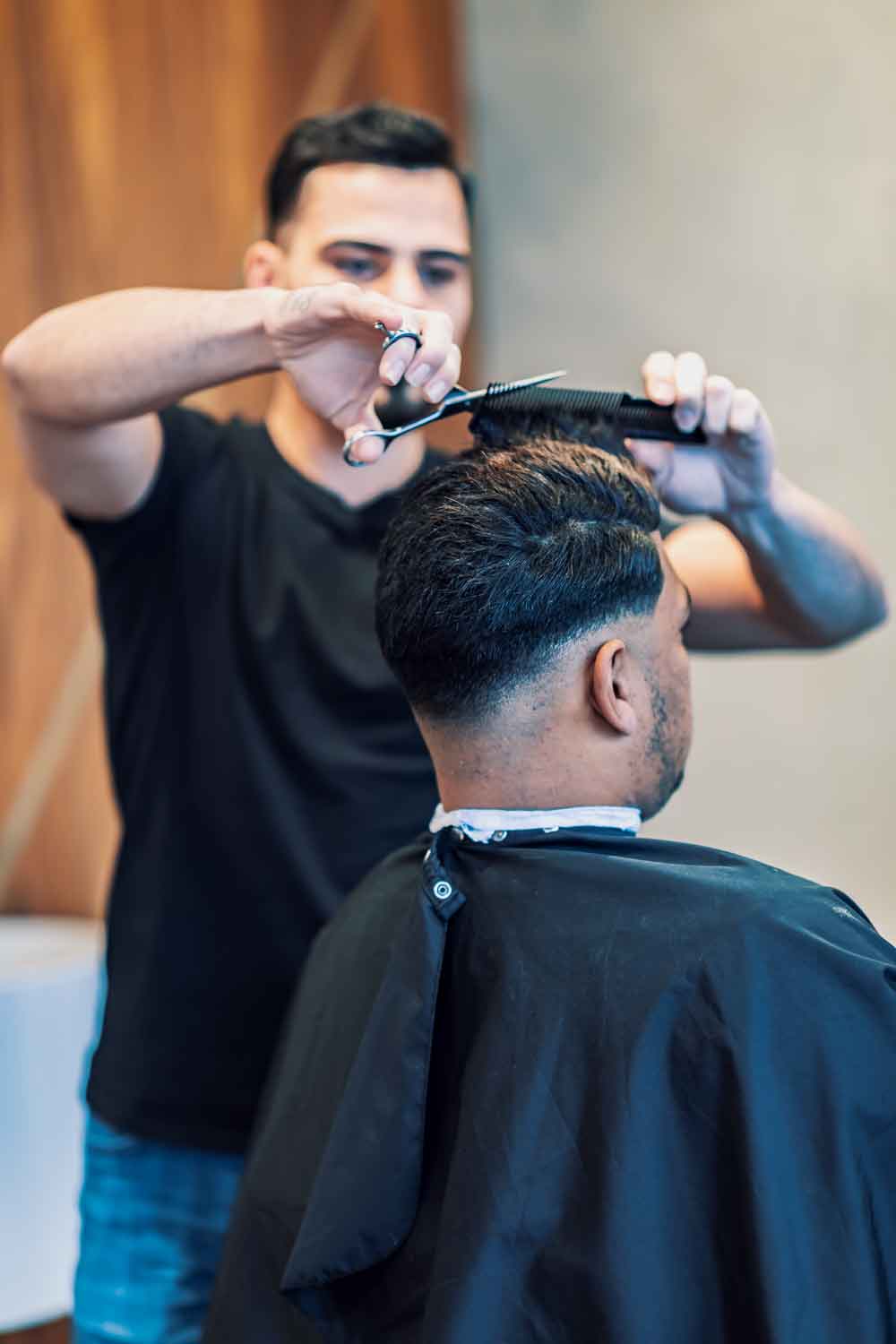 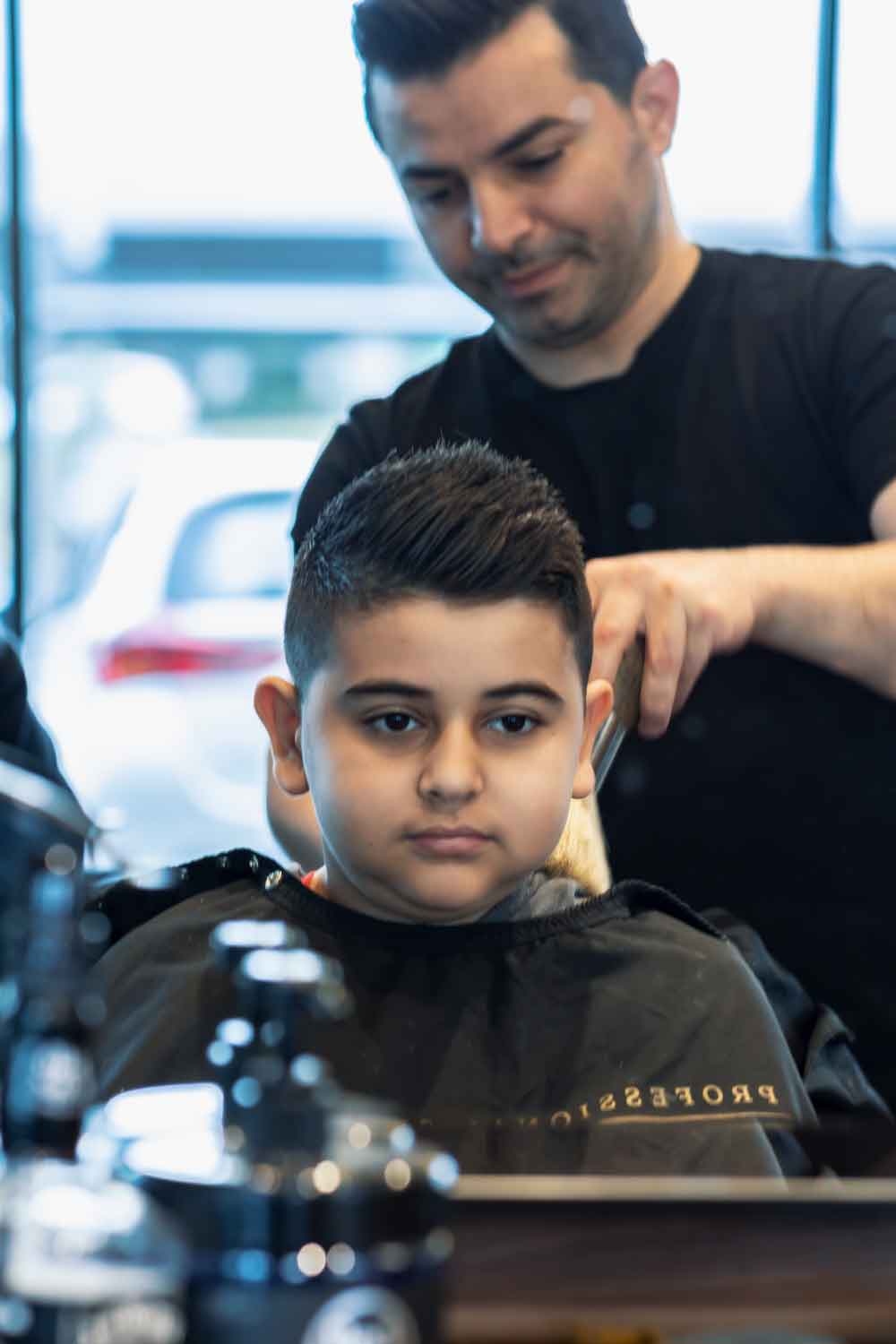 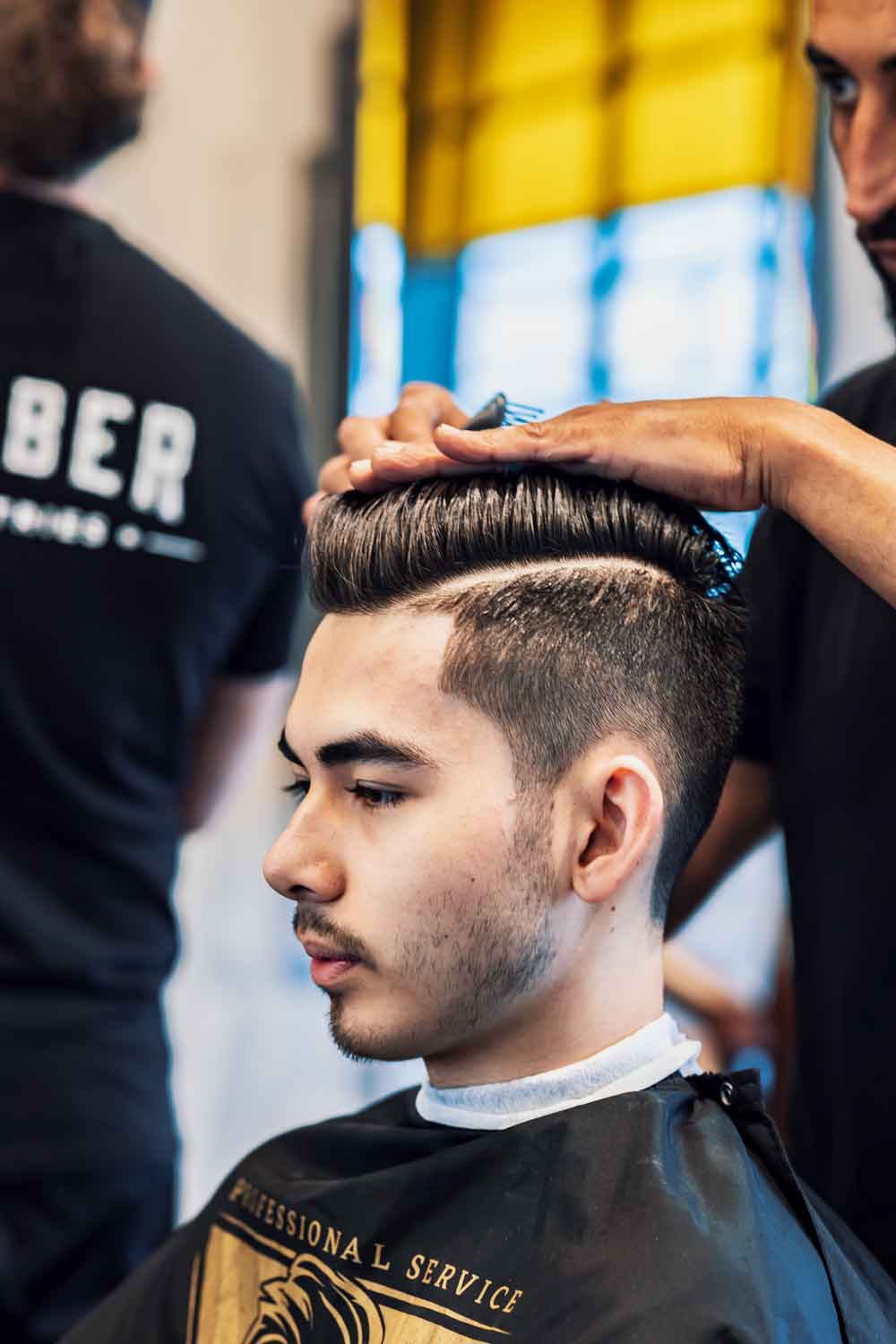 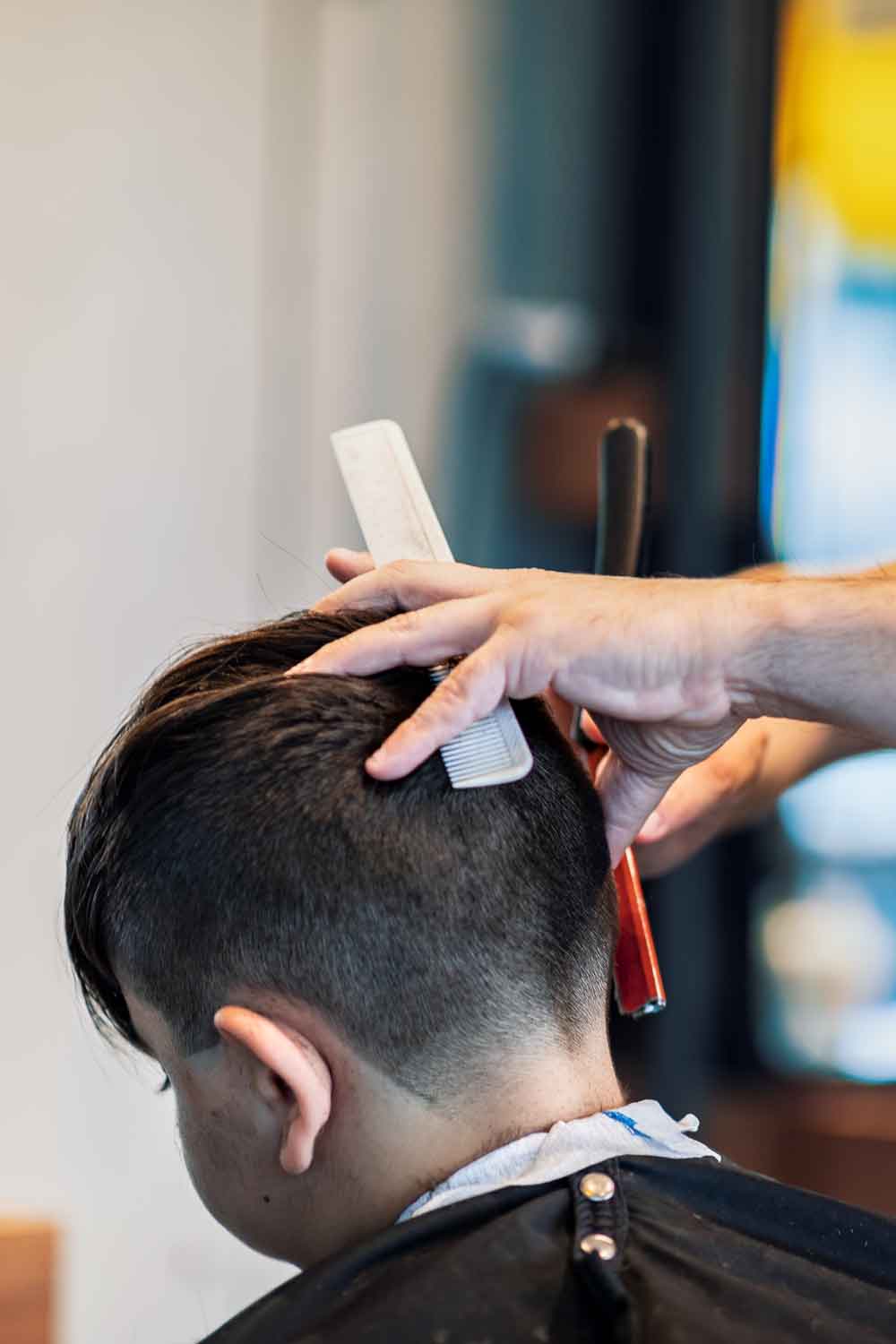 Today we empower you with some of that common barbershop lingo,

may you roll in like a boss and rattle it off proudly as you effectively communicate the details of that style cut you so desire.

‍This is the clipper number. The higher the number the longer the length. A number 5 leaves a decent length and a number 1 leaves very little at all, a zero means there is no grade on the clippers at all and they will trim down to the skin.

‍Describes the gradual shortening of the hair length. Predominantly the length is tapered down the back and sides of the head. Most men’s styles involve some degree of tapering.

‍This is the blending of the different lengths at the back and sides of the head. This creates an even gradient between the razor level and the longer locks left on top for styling. Taper, low, mid and high fade make up the four main styles, each fade starts from skin length at a different point on the head.

‍A line that accentuates the natural part and creates a clear separation between the top and sides of the hairstyle. The hard part is usually cut evenly along its length with clippers and or a strait razor.

‍Straight lines and and sharp angles are cut at the edge of the forehead / temples, often blending into  the sideburns or beard.

‍Refers to the cutting of hair at different lengths to create the illusion of length while providing volume and texture, most medium to long hair styles involve some layering.

‍Is another texturing method, but instead of using scissors or clippers the hair is cut away with a strait razor, the effect creates a highly textured finish with thinner strands at the ends. This technique is is not recommended for curly hair and is an advanced skill.

‍The scissors used to thin out thicker hair have teeth that allow some strands to be cut away while leaving others. This allows the Barber to control volume without removing extra length.

‍Can achieve both some texturing and thinning. The tips of the scissors are used at an angle to snip away hairs at varying lengths.

As you may have guessed, this one is when the Barber uses their comb to pick up the desired length and then cutting above with their scissors.

And that is all for today’s lesson, hopefully you can now put a name to some of the techniques our Barbers use when styling your hair. May you also roll up and request a ‘mid fade with some layering on top’ or a ‘guard 1 buzz cut’. Best not to show off too much, but nice to know the lingo when it is needed.

A BLOKES SURVIVAL GUIDE TO SUMMER IN AUSTRALIA

Summer Downunder, arguably the best time of year but not without its obstacles either. We’re talking tropical storms, heatwaves, bushfires, test cricket, all the nasty stuff. There is plenty of good too though and today we break down a blokes guide to surviving the Australian Summer.

Here at Barber Industries we stock an extensive range of grooming products. Many are barbershop only brands, which means you can not purchase the same products in the supermarket. Only the finest quality brands grace our shelves and there is none that carry quite the same influence, history and story as Proraso. Today we look at Proraso’s Single Blade Series which is a product line dedicated to professional barbers and designed to heighten the routine of the traditional shave and beard styling experience.

CONQUER THE SEASON - GETTING FIT THIS SPRING

Every day we make it our mission to try and keep you looking and feeling your best. We believe that the right haircut and grooming makes all the difference in preparing for the challenges that lay ahead. With that said, today we take a look at some of the other things that you can do to put your best foot forward, get fit and conquer the season this spring.

This Covid-19 Virus has turned out to be a real mongrel and is running rampant through Victoria and there are still new cases popping up here in the South West of Sydney. Right when you think we got through this whole thing relatively unscathed it sticks it’s ugly head back up and starts causing some serious problems again.

Learning the art of the straight razor shave is in no way a quick or simple task, shaving with a straight razor as compared to a disposable counterpart is a skill that calls for patience, a steady hand, lots of practice, and even a few nicks and cuts along the way. The time-honed practice offers clean, smooth shaves by those with an unwavering dedication to their trade.

HOW TO GROW YOUR BEARD AND KEEP YOUR JOB

Are you worried that growing a beard at work might get you fired? Well, you're probably a little too paranoid. See, beards are the ultimate statement that you're a man, and people can rely on you. Just look at history. Many prominent people wore a beard, and they got away with it, so why wouldn't you? Is it because beards are history, making you look like you've just come out of the stone age? Well, that would be right if you didn't take care of your beard properly. A well-groomed beard is a perfect addition to your aesthetics, making you look smart, professional, and manly.

Have you hit the ground running so far in 2020? How’s the upkeep of those new years resolutions? That promise of a new year and a new you can quickly get tested if you let those old habits creep back into the routine. Don’t be making those same old mistakes that had you dealing with a greasy, dry or crusty hair do. We wan’t to see you go forth and crush the new year so we have concocted a list of six common styling mistakes that you should avoid at all cost.

From all of the team here at Barber Industries Prestons, we would like to take the opportunity to say a big thank you to everyone who has shown us their support. Since our inception at Prestons Place, we have built up a loyal following and these are very rewarding relationships that we truely appreciate, we are thankful for the patronage and to be apart of the community here. We wish everyone an amazing Christmas and a Happy New Year. May you and your families have much joy over the festive season, please stay safe if travelling away and be sure to get back in the Barbers Chair here with us soon.

We have a large selection of mens grooming tools and products. Amongst that selection you will find a range of goods by 18.21 Man Made. They are a brand out of Texas in the United States and offer a range made with quality ingredients and the custom crafted aroma of sweet tobacco.

The barbershop has long been a place that was considered a safe haven for men, a place where men could openly and freely discuss topics that may otherwise be considered taboo. A trip to the barbers has always been a time to reset and refresh, a time to feel good and often an opportunity for a quick chat and some open debate or discussion. This Thursday we look to use that discussion to raise awareness of a great cause by asking the question RUOK?

Father’s Day is fast approaching on September 1st and we have loads of great gift ideas with razors, balms and oils that will all get dad looking and feeling his best. A great option is a traditional shaving kit or a high quality razor. With that said we’re not all Sweetie Todd so how will dad go about wielding his new weapon? Let’s take a walk through the process.