Barber Industries is pleased to announce the recent grand opening of our new barbershop in the Queen Victoria Building Sydney. With the goal of bringing back a traditional barbershop vibe we have created a concept that blends hair & beard treatments into a masculine haven for the modern man.

Right at the beating heart of Sydney, rich in history and heritage listed, the QVB is a fitting home for a Barber Industries Barbershop. Prepare to step inside a place that blends the tradition, aesthetics and nostalgia of the old-world barber shop with the modern comforts of today’s world. 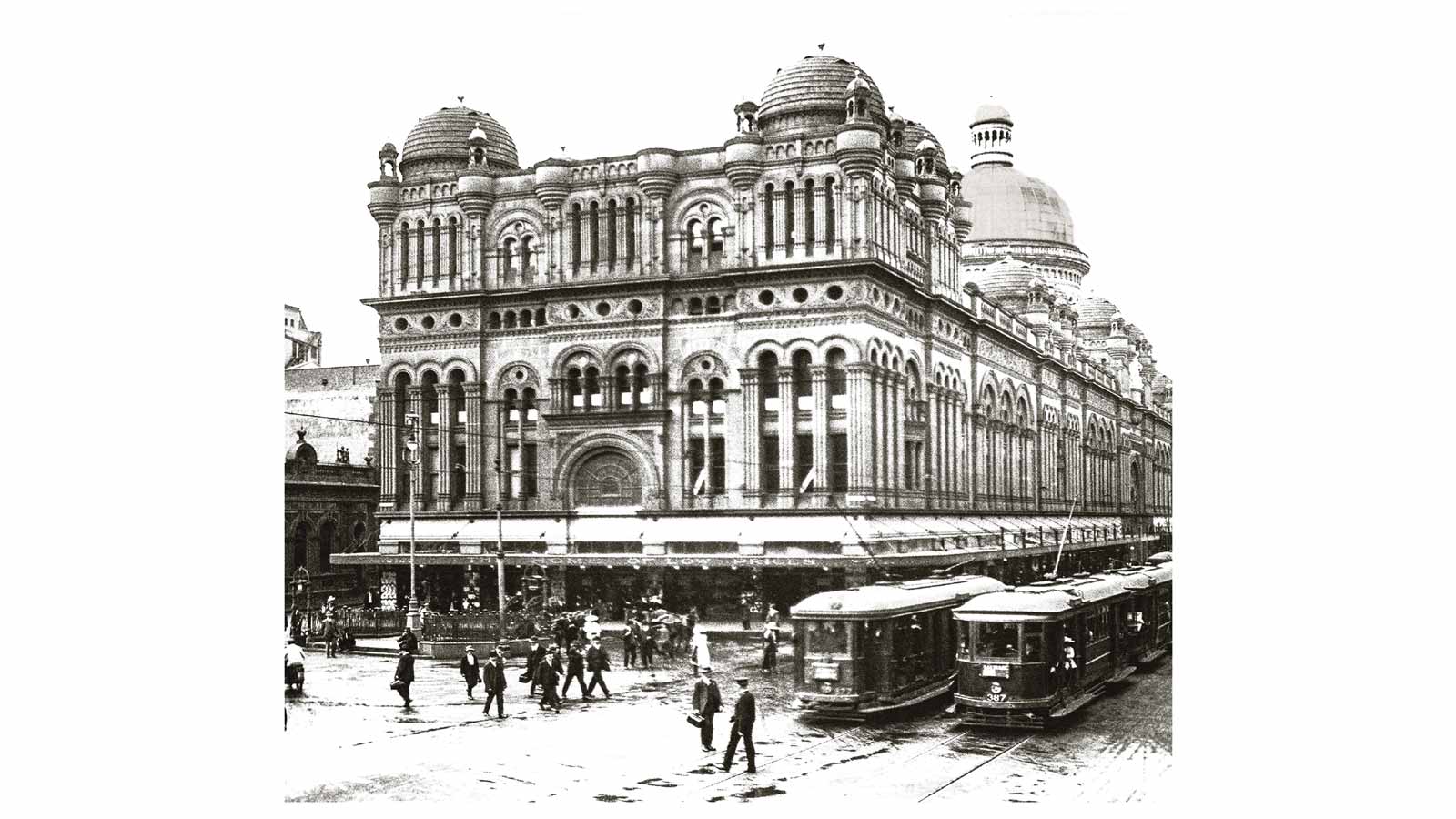 First opening as the the Queen Victoria Market Building in 1898, the QVB replaced the original Sydney Markets and was a grand vision for a retail hub that was ahead of its time. It was in 1918 that the building's name changed to the current Queen Victoria Building.

The QVB was designed by NSW Government Architect of the day George McRae and elaborate Romanesque architecture was chosen for the design.

The most dominant feature is the almighty centre dome that consists of an intricate inner stained glass dome and an external copper clad dome.

During the 1930’s renovations converted much of the retail space into offices and sadly large portions of the original fit out were destroyed.

1959 marks the buildings darkest days when a proposal was put forward to demolish the building to make way for a car park, civic square and parklands. Thankfully after a swathe of public outcry the Sydney Council instead made a commitment to the restoration of the QVB. In 1976 a panel was formed for the QVB restoration and tenders were called for submission.

It was not until 1983 that a restoration program was signed. The major refurbishments pulled the building back towards the the original vision however they were an interpretive reconstruction as opposed to an accurate reconstruction. These works were completed in 1996, just in time for a triumphant 100 year celebration.

In 2009 another $48m refurbishment was completed and the QVB glistened in all of its re-found glory. The building was heritage listed in 2010 and now stands as a testament to the craftsmanship of the artisans who lovingly re-crafted the finest of details and the people of Sydney who refused to see it lost.

WHY YOU NEED OUR MEN’S FACIALS AT QVB SYDNEY

Here in the city, life’s a hustle and we grind through our days in a modern world that is full of skin pollutants and contaminants. Your skin is your largest organ and you don’t need a doctorate degree to know that you need to take good care of it. That is why our men’s facials are so appropriate and so damn good, let’s discuss in more detail.

Men with dry, oily, sun-damaged or acne-prone skin will all greatly benefit from the rejuvenating properties of a men’s facial treatment.

The modern day urban environment is taxing on our skin and can be the cause of many skin conditions. The exposure of our skin to air pollutants has been associated with early ageing as well as inflammatory and allergic skin conditions. Our men’s facials are skincare treatments that combat many of these issues and are great for the overall skin health of the modern day man. Men with dry, oily, sun-damaged or acne-prone skin will all greatly benefit from the rejuvenating properties of a men’s facial treatment. Let’s get granular and look at the complexities..

It all starts with proper cleansing to remove accumulated dirt, pollutants, dead skin cells and excess oil from the surface of your skin. A facial scrub will clean deep within the follicles and open blocked pores to release grime.

A clay mask treatment or microdermabrasion both enhance skin elasticity and refines pores. The evidence of sun spots, fine lines and wrinkles are all reduced while a more even texture and tone of skin is achieved. The toning properties shrink and close pores which helps prevent future intrusion of environmental contaminants and impurities.

The skin is fortified and protected against irritation and dryness with moisturiser. This aids in the repair of the skin and allows younger skin cells to surface. Massaging the face increases absorption of the moisturiser while releasing toxins, tension and tones facial muscles. The whole process leaves you with firmer, even, clearer and younger looking skin.

Book online for your Men’s Facial or Quick Facial at Barber Industries QVB by clicking here.

Here in the city men are spoilt for choice when it comes to barbershops. The thing is however that not all barbershops are the same and not everyones expectations are the same either. For the men who pride themselves on making the best decisions around health and personal presentation, Barber Industries QVB is the barbershop of choice for you. You want to look your absolute best and it is through this endeavour that you will discover the very best barber service that your money can buy in Sydney.

BACK TO SCHOOL BARBERSHOP GROOMING ESSENTIALS FOR BOYS

As we near the return of school for another year, it is time to get the boys organised, looking fresh and ready to knuckle down for some academia. To assist, we have organised a list of back to school grooming essentials for boys. Read on for some barberly advice on shopping for the boys here at Barber Industries QVB.

As a ‘Master Barber’ and an expert in his field, plenty of hard work and long hours have seen Ali build a national brand and become the successful CEO of what is now one of Australia’s fastest growing Barbershop franchises.